Not long after returning from my Stonehenge trip I was away again for a wedding in Devon. I say a wedding but it was not one that would be recognised by UK law – indeed the ceremony included the words “fuck the state and it’s bits of paper”. The event took place at Landmatters permaculture project near Totnes, which I had heard about but never visited. There were around 200 guests camping for the weekend and I knew a lot of them (including the happy couple) from the 2005 G8 Bike Ride and Bicycology. For music and PA they were keen to use the bicycle towed sound system called Pedals that I helped build nine years ago for the G8 ride, so I agreed to fetch it in my van from its present home in a London and take it to Devon.  I set off a day early to visit a friend Mike in Exeter and slept on his boat before continuing on to Totnes, from where I followed directions down increasingly narrow lanes to Landmatters.

It was a great weekend but I won’t go into detail except to say that it became apparent that Pedals had a fault in the bass amplifier which meant it would cut out whenever the volume was turned up beyond a rather moderate level. When I got home I searched online and found that Argos was selling a Juice JA1800D for £99 which I thought would be a good replacement for the Kenwood KAC-8103D. I ordered one which worked when first installed but failed after only a few hours. The mid/top amplifier is also a Juice and has provided years of reliable service under harsh conditions so I hoped it was just a rare defective unit and got it swapped. I did a few other minor repairs and cycled the system down to the town centre for the opening of our new skate park, stopping off outside the fire station to support the FBU industrial action. Shortly after that I delivered Pedals back to London and as far as I am aware it is still going strong – if you are on any protests there you might see it. The old Kenwood amplifier was still under guarantee from a repair earlier this year and hopefully it will be resurrected again to be used in another system.

Pedals in my Van

I have continued to increase my level of involvement in local cycling activism, particularly with Sustrans, where I have been logging volunteer hours doing “vegetation management” on route 12. I also answered a call for volunteers to help on the Sustrans stall at Shambala. It was sold out already but Sustrans provided me with a crew ticket plus travel expenses in exchange for 24 hours on the stall over a four day period. I said I was happy to do any of the activities and got some shifts on the info table, encouraging people to sign up for the e-newsletter etc. The rest of the time I was doing kids stuff – badge making, colouring in, bike decorating etc. Because the cycle powered cinema refused to work we ended up over-staffed and the volunteers had their hours halved, which meant I had a lot more time to drift about the place aimlessly. There appeared a person with a recreational drug menu, including three different doses of LSD – mild, medium and strong. Despite the rather short time (nine weeks) that had elapsed since my previous experience I threw caution to the wind and equipped myself with a single tab of the mild. I took it shortly before dark and enjoyed watching some amazing bands. Later it became apparent that the dose I had taken was not what I would call mild, and in the early hours I even visited the welfare tent to try to “get my shit together”. The sign said “Tea and Empathy” and a cup of peppermint tea with sugar was just what I needed. Others were worse off than me, lying on the floor wrapped in foil emergency blankets, maybe lost in an alternate universe or perhaps just hypothermic. Revived, I think I went straight back to “Roots Yard” where there was a fire to sit round and a marquee with a decent sound system playing non stop reggae. I didn’t go back to my tent until sunrise and eventually slept for an hour or two before my noon shift. Speaking of drugs, what is it with nitrous oxide these days? I first noticed people “huffing” at Glastonbury Festival in 2011 but now everyone and their dog seems to be doing it. The conditions of entry stipulated no nitrous but there was clearly plenty available and the sound of balloons being filled became so familiar that I almost stopped noticing. The ground in some places was littered with spent cartridges. I tried it once about twenty years ago in New Hampshire where they referred to it as “doing whippets”. I didn’t really like it and can’t understand the appeal. 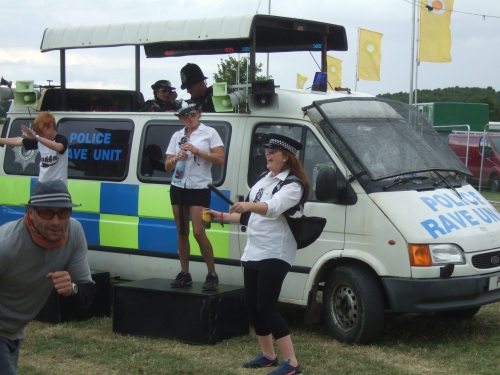 Anyway, I enjoyed Shambala but I was thinking about it again after watching a video called Fuck Burning Man where a guy critiques the Burning Man corporation and “Burners” from the point of view of a radical activist (he used the wonderful phrase “pat yourself on the backtivism”). The regulars at Shambala seemed overly interested in the fact that this was my first time and refer to “Shambala virgins” (the term was even used in the online survey the organisers pointed us to after the festival). I guess there are people for whom Shambala is not just one of a number of great festivals (and festivals are not just one of a number of great types of experiences) but is like their church if were religious or their team if they were a football fan. Don’t get me wrong, it was a great party but it seemed a little bit cultish. The same goes for Sustrans in a way. The very strong branding actually includes the phrase “Join the movement” and we all had to wear our Sustrans T-Shirts while on shift. It can feel like the goal is not to improve conditions for cyclists but simply to recruit more members to the organisation – like the dreaded SWP newspaper sellers. I know it is not that bad but I feel a lot more comfortable out on the routes with my saw and loppers than trying to sell the Sustrans brand to spaced out festival goers. While on the subject of cults, what is it about Jehova’s Witnesses? Two doors down from me live a very nice Cypriot couple who happen to be Jehovas. They gave me the hard sell when I moved in twenty years ago, at which time I patiently explained that I consider the god they worship to be a mythical being. They have not bothered me too much about religion since then but a couple of days ago I stopped to say hello at their stall in town and ended up being shown a load of photos from a recent three day annual convention at Twickenham which was apparently attended by some fifty five thousand adherents. People flew in from all over the world for this jamboree and my neighbours (particularly the wife) seemed terribly pleased about it all. I on the other hand was thinking how depressing it was that so many of my fellow humans could sincerely believe such nonsense. That links to something else I briefly looked into recently – the question of the Historicity of Jesus. According to Wikipedia, the majority viewpoint of scholars is that Jesus existed and until recently I shared that viewpoint (though of course he was not the Messiah, he was a very naughty boy). Then I watched this video of scholar Richard Carrier explaining the evidence that changed his mind.

On Sunday I decided to take my bike on the train to Kings Cross and visit the Royal Greenwich Tall Ships Festival. This took place across four sites (Wood Wharf, Maritime Greenwich, Greenwich Peninsular and Royal Arsenal Woolwich) and I went to all of them, which meant cycling about 25 miles in total. At Greenwich Peninsula I met up with Mike who had arrived on a 17m ship called Moosk that was docked across the river at Wood Wharf. He had set off with the regatta from Falmouth on August 31st and described it as the best week of his life. There were one or two hairy moments, like complete engine failure in the middle of the night off Dover at the end of his four hour shift. They had been motoring into a light headwind and had to turn around and ride the breeze into Dover, getting permission from the harbour master to enter port under sail. In the morning he cleaned out the fuel system and they were able to continue on their way. On my way back to Kings Cross I stopped again at Wood Wharf to get a picture of Moosk. 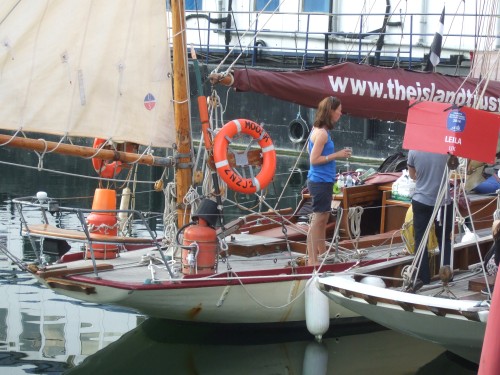 By the way, Wood Wharf is where I was last aboard Ms Stubnitz, back in May last year. The Stubnitz is a two and a half thousand ton former East German deep sea fishing vessel, operating as historic floating cultural venue. I recently learned from this mixmag article that Ms Stubnitz is in need of a classification renewal which will mean going into an expensive dry dock for refurbishment. They have set up a crowdfunding campaign which has so far raised nearly EUR 15,000 of its EUR 50,000 target.